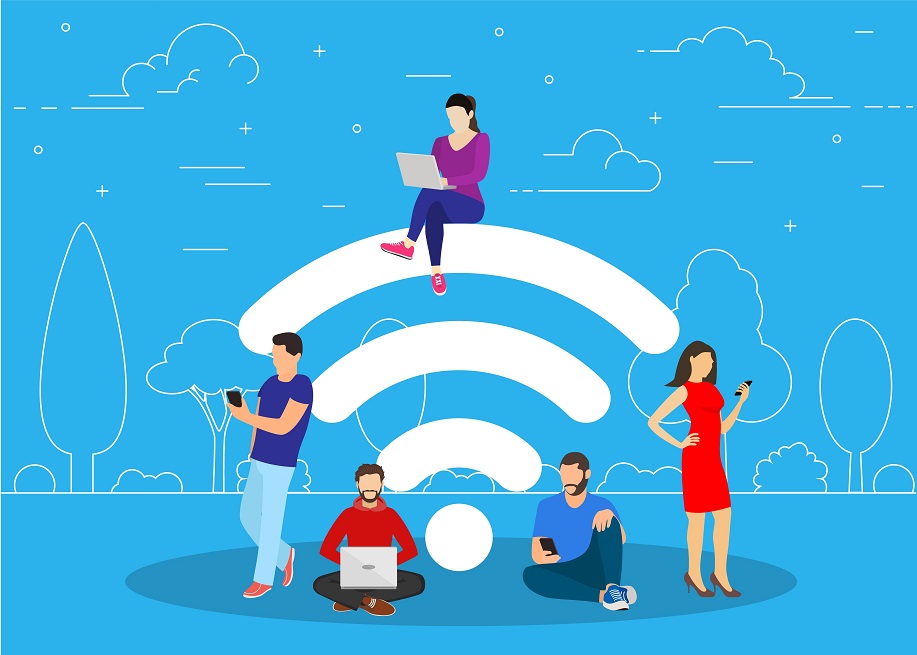 WiFi6e is the big brother of WiFi6, which is a wireless standard known as 802.11ax that the IEEE standards committee and the WiFi Alliance recently ratified. WiFi 6 debuted in 2019, which brought multiple cutting-edge RF technologies like MIMO and OFDMA. Not only did it make the network faster, but it also allowed for more connected devices to be on the same router without any delays.

WiFi 6e brings all of the new technologies of WiFi6 and superimposes them on previously unused “virgin” 6ghz spectrum. Because this spectrum is free of interference from legacy hardware (and your pesky neighbor’s WiFi), WiFi6e will run at blazing speeds. At almost 1 GHz in size, the 6GHz spectrum WiFi6e will be licensed to use one of the largest frequency bands available to the consumer. This spectrum quadruples the available bandwidth, which will reduce interference and increase speeds for anyone who has WiFi6e cable equipment.

There are some downsides; WiFi 6e operates at frequencies close to the mmWave, so the data is the best for close-range connections. For example, if two or more devices in the same room want to send data at fast speeds, WiFi6e is the perfect fit. The shorter coverage area of WiFi6e may seem like a disadvantage; it works very well in dense environments such as a restaurant or apartment complex.  Which means you won’t need to fight your neighbor for the same limited bandwidth space. Instead, there’s a lot of bandwidth available for everyone to use.

Why Should I Use The WiFi 6e?

The WiFi 6e’s speed and bandwidth capabilities allow for reduced ping times, perfect for gaming. Upcoming technologies like VR headsets will require WiFi6e because of their high data speed and low latency.

Although WiFi6e capable routers and switches will work with legacy hardware, the new 6GHZ spectrum it utilizes will not be available to devices that do not have compatible hardware. If you happen to be on the market for a new laptop, cell phone, or computer, make sure that it has WiFi 6e capable hardware to ensure future proof.

Various companies, including Apple, Facebook, Google, and Intel, support the jump to 6GHz. The technologies these companies continue to develop will have even greater bandwidth requirements than we use today, and the only path forward is with access to more untapped bandwidth

Plus, most of the data traffic and internet usage is on the 5 GHz bandwidth. With all that usage, it is starting to buckle under the weight. The move to 6GHz is all about heading to the future of WiFi and improving the relationship for WiFi users.

One of the largest concerns for people who like to use the latest in internet security is the desire for safety. Thankfully, both WiFi 6 and Wi-Fi6e are safe for users and were designed with safety in mind. WiFi 6 operates in the 6GHZ band of the electromagnetic spectrum; the wavelength is about half the traditional microwave signals size.

Is It A Good Time to Upgrade My Router to WiFi 6e?

Yes! Because compatible devices are required for 6e, it’s essential to invest in hardware that has the capability, even if your network has not been upgraded yet.

A WiFi 6e router is backward compatible with 5e and lower era devices, but those devices can’t use the 6GHz band. If you are solely looking for speed, then purchasing a router without the upgraded devices can’t help you out.

It’s a good idea to wait until WiFi 6e is released to the public and more devices are compatible. Until then, you can make do with an old router. Once more devices can use the router, and you can access the 6GHz bandwidth, then it would be a great time to upgrade.

How Do I Connect a WiFi 6 Router?

To connect a WiFi 6 router, you need to figure out where the router should be placed. Make sure to find an open space that’s also tucked out of the way; also, keep at least some part of it available to make sure the signal is strong. Then it would be best if you plugged the router into the modem with a category six cable.

The cable is compatible with both 6e products and 5/5e products, so you have to have a CAT6 cable or better. You also need a 1 GBPS connection to have the best speed and to get the most of the 6e router. Connect the Wide area network (WAN) cable to the ethernet port router and then plug the router into a wall socket. Then, it would help if you turned on your computer and set up a username and password. All you need to do is configure the router and then connect your devices to it.

The router should walk you through this process, and once everything is connected, you can use your devices with the new router!

What Is The 6GHZ Band?

Most WiFi devices either go at 2.4GHz and 5GHz connections. The new 6GHz band is designed to open up more spectrum to end users to bring them faster speeds and greater reliability.

The use of 5GHz WiFi continues to grow as more people use the internet for much longer. This slows down the bandwidth and gives everyone problems.

6GHz is another spectrum that is now available for unlicensed work, and according to the tech giants, it is focused on improving all aspects of internet use. Not just for the fast speeds and security, but also for the increased innovation for VR games and augmented reality. Because it is fertile ground and an entirely new frequency, the new spectrum can’t work with old technologies.

Tech companies are starting to build new devices that are capable of getting on the 6GHz frequency. The only downside of 6GHz is that it consumes more power, especially if the access points are tri-band and support all three bands. For tri-band access points, they will support 2.4 GHz, 5 GHz, and 6Ghz as well.

What Should I Know About WiFi 6e?

WiFi 6e has the potential to change the way that we use the internet entirely. It offers increased speeds, more close-range bandwidth, and improved speed for gaming and streaming. However, it is still new and is only backward compatible with 5e and lower products. If you are using an older computer, then you can’t gain access to the new 6GHz band.

You must buy new devices that are compatible with and capable of using a 6GHz band, and not all devices support that just yet. Waiting for when 6e becomes a bit more widespread in the tech industry might be the best decision to make sure that you can make an informed choice. Then you can make the best decision based on your own tech needs and what you want to get out of your devices.

Once you get the ability to go onto WiFi 6e and see all the untapped potential for yourself, you might not be able to go back to regular WiFi anymore! Yes, it’s that good!