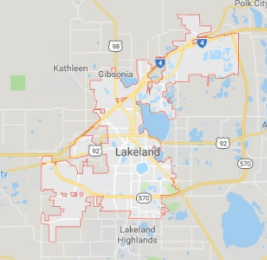 Lakeland, Florida and its Growth

Florida became a state in 1845, and Polk County was established in 1861. After the American Civil War, the county seat was established southeast of Lakeland in Bartow. While most of Polk County’s early history centered on the two cities of Bartow and Fort Meade, eventually, people entered the areas in northern Polk County and began settling in the areas which became Lakeland. Lakeland was first settled in the 1870s and began to develop as the rail lines reached the area in 1884. Freedmen settled here in 1883, starting the development of what became the African-American neighborhood of Moorehead. Lakeland was incorporated on January 1, 1885. The town was founded by Abraham Munn (a resident of Louisville, Kentucky), who purchased 80 acres (320,000 m2) of land in what is now downtown Lakeland in 1882 and platted the land for the town in 1884. The name of the Lakeland is due to the many lakes near the townsite.

Lakeland is a city in Polk County, Florida, along Interstate 4 east of Tampa. The westernmost city in Polk County, is part of the Tampa Bay Area. According to the 2013 U.S. Census Bureau estimate, the city had a population of 100,710. Lakeland is a principal city of the Lakeland–Winter Haven Metropolitan Statistical Area (coterminous with Polk County). Which had an estimated population of 623,009 in July 2013 based on data from the University of Florida Bureau of Economic and Business Research.

The dominant feature in Lakeland is the city’s many lakes. There are 38 named lakes in Lakeland which, along several other unnamed bodies of water, have a tremendous impact on the community’s culture. Some of the more prominent lakes in the area are Lake Hollingsworth, Lake Morton, Lake Mirror, Lake Gibson and Lake Parker, which is the largest. Points of interest include Munn Park Historic District, Polk Museum of Art and Theatre, Silvermoon Drive-in, Lake Mirror Promenade, and U.S.A. International Speedway. There are many of private and public colleges and universities in the area, the most well-known of them being Florida Southern College.

Economy and Growth of Lakeland, Florida in numbers

Lakeland has seen the job market increase by 2.9% over the last year. Future job growth over the next ten years is predicted to be 42.5%, which is higher than the U.S. average of 33.5%.

Tax Rates can have a big impact when comparing the cost of living to other cities.

Income and Salaries for Lakeland

Those numbers skyrocketed this area to 4th in the nation for percentage growth!

The Mayor was asked about this growth to which he replied:

“It’s not that surprising; this is a super nice place to live. The roads are more crowded than they’ve ever been, and the restaurants are harder to get into. We’ve seen everything that goes along with a larger population.”

The city is experiencing tremendous growth along its Interstate 4 corridor, particularly in the northeast. The city of Lakeland is situated in the center of Florida and is the pre-eminent logistics hub of Florida.

People who want to have access to Tampa and Orlando job markets while being able to afford homes and more conveniences are locating to Polk County.

Jason Willey, the city’s business development manager, said that the City of Lakeland experienced a boom in the construction of new single-family homes. Over 400 permits were issued to build new homes – more than double the city’s historical average.

He also said that the city needs to make sure the growth doesn’t get ahead of them and to keep the quality of life that is attracting all the people to come here.

The desire to provide a high quality of life for an ever-growing population and provide the necessary infrastructure to attract these large employers requires a delicate balancing act by local officials.

“No real pressure, but it’s a real challenge,” he said.

Cities able to keep pace with the rapid changes appeal to major employers and can draw new businesses to the area.

One such business is the approval of Amazon Air Cargo Complex. City commissioners are excited to sign a deal with Amazon to build an air cargo facility at Lakeland’s airport.

Lakeland officials unanimously approved a 20-year deal with Amazon on May 20 to lease 47.2 acres at Lakeland Linder International Airport to construct a seven-jet cargo hangar with additional support facilities. It is expected to bring 800 to 1,000 jobs to the area.

Mayor Bill Mutz said that the Amazon Air Cargo Complex will benefit the local population in the hundreds of millions of dollars.

“Our goal is not to be the next Tampa International or Orlando International. We want to be Lakeland at the end of the day,” he said. “We have certain niches we are going to go after, and that’s what we’ve been doing over the past four years.”

Why is this important?

That same website has named Lakeland as the Top Market of 2019.

Lakeland beat the likes of Miami and Las Vegas and is projected to have a 5% sales growth and a 7,4% price growth in the coming year. It is largely driven by a millennial population that is expected to take out a 32 percent share of mortgages.

The median forecasted price for a home is $161,757, which is approximately $100,000 cheaper than the national median.

With employment growth expected to top 3 percent, forecasted income growth of 4.7 percent and a growing local economy that is expected to grow 4.9 percent in 2019. Lakeland is one of the up-and-coming cities for homebuyers.

To determine which real estate markets might be the strongest in 2019, the company analyzed the number of existing home sales and their prices, along with the amount of new home construction. They did this for the 100 largest markets across the U.S. They also researched the “local economies of each area, along with population trends, unemployment rates, median household incomes, and other factors.”

Even though the population has grown steadily over the past decade, the housing inventory in the area (i.e., the number of homes that are actually listed for sale) remains fairly low. Toward the end of 2018, the Lakeland real estate market had about a three-month supply of homes for sale. That’s well below the five to six months that is considered to be a “balanced” real estate market.

The key takeaway for home buyers: Prices in this market are expected to rise at a steady pace throughout 2019. So, you might want to consider making your purchase sooner rather than later, to avoid higher housing costs down the road.